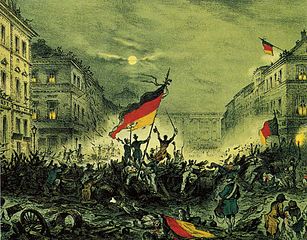 Rebels can either be nationalist or in favour of a specific government form. Nationalist rebels will occur if one country owns another country's cores. (e.g. Norwegian rebels in Sweden) If a nationalist revolution should succeed, it will need to control every state where it has cores in.


The other kinds of rebels try to force a new Government type. Jacobins will enforce more democratic types of government, while Communist, Fascist, Anarcho-liberals and Reactionary rebels will enforce their own dictatorships. They need to control the nation's capital until the start of the next year.


In Uncivilized nations reactionaries won't create a presidential dictatorship, but they will roll back 2 militant reforms and 2 economic reforms instead. This will be a catastrophe for any uncivilized nation as it will be put 20–30 years back

Jacobin Rebels Jacobins are one of the first types of rebels to appear in-game. Inspired by the leaders who were the cause of the French Reign of Terror, these rebels are fiercely liberal. When a nation is oppressive to its people or when a government is leaning toward anti-liberal policies, POPs with high enough militancy will join the Jacobin cause. Jacobin rebels will enforce a democracy should they succeed. They are a great way to shake a reactionary government loose. While they spawn in large numbers, in the hope to overwhelm the government, they are quite weak and easily beaten, as they have no leaders. A well-organized force of half the size of the rebel army is plenty to take them down. Don't let them overrun your military, and putting them down is easy.

Reactionary Rebels Reactionary rebels are one of the first types of rebels to appear in-game. When a nation is speeding along a liberal path, reactionaries create a roadblock. Reactionaries vary from absolute monarchism, to simply wanting to roll back liberal reforms. They are great for getting rid of a democratic government or constitutional monarchy. They will form an absolute monarchy, if a constitutional monarchy or a presidential dictatorship otherwise, if they succeed in a civilized nation, while they will simply roll westernising reforms back in uncivilized nations. Like Jacobins, they are very weak compared to your own forces. In Spain, Carlist Rebels, representing rival claimants to the throne, take the form of reactionaries.

Anarcho-Liberals These rebels appear early in the game, during the late 1840s. They demand a complete devolution of the state. They can be very annoying to deal with, as they often rise up with other factions to supplement their own forces. They will force a Bourgeois dictatorship should they succeed. Like Jacobins and reactionaries, they are very weak compared to your own forces.

Communist Rebels Appearing in the middle to late game, communist rebels champion the causes of the masses. They achieve popularity very quickly and can throw you off track. They will force a proletarian dictatorship if they take power. However, communist governments allow for a large amount of control compared to their democratic cousins. If you don't want a communist government, taking them down is quite easy.

Fascist Rebels In the last leg of the game, fascism becomes quite popular. Like communism, if you're not prepared, they can take you off-guard. However, fascist governments are very attractive, for they allow significant control over your nation. They will enforce a fascist dictatorship if they take power.

Nationalist Rebels Nationalist rebels appear at varying times in the game. More often than not, when you own land the does not have your cores in it, if you're oppressive to a certain group of people, or if another country has cores on your land, then nationalists will spawn. They come in two groups: "regular" nationalists appear in countries that have been completely absorbed by someone else, and must control all cores that belong to them in order to enforce their demands; Pan-nationalists appear under one of two circumstances, either when you control territory that has cores from another country that already exists, or in countries that belong to a specific nation, such as Scandinavia or Germany. Both types of nationalist rebels are stronger than most. They have leaders, are in their own homeland, and will fight tooth and nail to get back what was once theirs.

Other Rebels There are some rebels that can spawn as a result of events or decisions. Two Sicilies and India, for example, have certain types of rebels that attempt to form their nations, Italy and India, after a decision is made (for Sicily) or an event happens (for India).